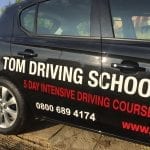 Christopher Prescott from Gypsey Bridge in Boston has started 2019 off at full steam!

He passed his driving test today at Boston and says:

“I found that it was a really good idea to do a session yesterday with Tom just around Boston.  It helped me to keep everything fresh in my mind and settled my nerves.”

Christopher had 3 goes at his driving test and is delighted to now have his full drivers licence.

Previous attempts were on Sunday mornings because he is so busy working as a plumber in Boston.  He says:

“I actually found Sunday mornings to be a bit too quiet for me.  I found a weekday test in the afternoon worked better for me as it meant I had to be more alert.  Driving around on a Sunday meant there was hardly any other traffic about!”

Owner of BIG TOM, Tom Ingram was thrilled with his pass:

“It’s great to see Christopher is continuing this run of Christmas and New Year driving test passes for BIG TOM customers.  I’m particularly pleased for him as I know the freedom of driving around in his work vans will make a big difference for his company set up.  Well done Christopher!”