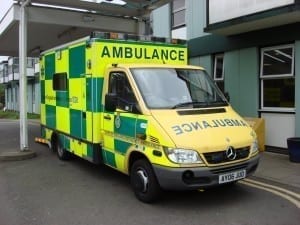 Whether it be police, fire or ambulance, that feeling you get when you are waiting on a red traffic light, and you can see, and/or hear the emergency vehicle on a call approaching from behind – what to do? Are you ALLOWED to go over the STOP line in this situation? This blog will give some practical advice.

This situation can potentially affect ALL drivers, not just learners – it is very handy to know NOW what your actual rights are regarding this situation, so that you do not take an action that might either cause serious injury to another, or be illegal.

Lucy who passed with BIG TOM Driving School a few months ago, texted us recently to say that she had driven over 3000 miles in various locations of the UK and thanked us for preparing her properly for real-life driving rather than just for the driving test. But she had a question to do with what to do when an emergency vehicle on a call approaches from behind when you are stationary at a red traffic light. She recently had this situation happen to her, she decided to NOT drive over the stop line at the traffic lights when an ambulance approached from behind, and many people (including some experienced drivers) have since criticised her for not getting out the way. She contacted us, as we did cover EXACTLY this situation in her driving training, and she was now wanting some assurance that, what she was told in her training, was actually correct. It was, and let us now explain why for the benefit of all reading with interest.

This situation is something that crops up regularly, there is a natural, instinctive reaction to quite simply do anything that is required to “get out of the way” of the emergency vehicle. However, you need to take care. The danger created if legislation were to give motorists the impression that it would be acceptable to go through red lights on the sight or sound of an emergency vehicle would be potentially catastrophic. It poses so many questions and points of law, that it would be very difficult to legislate eg how close was the emergency vehicle at the time, did you see that it was behind you, were you aware that it needed to proceed in the direction that you were obstructing and so on. It would be very difficult to the point of impossible in making this a cast iron “defence” in a court of law. Often in these types of situations in law when there is a great degree of subjectivity, the question is asked “Are these the actions of a reasonable person”. But as it stands, there is no legislation in existence that asks this question specifically in regard to a defence for someone driving through a red traffic light.

As such, it still remains to this day, that legally, the only time you are allowed to drive through a STOP line on a red traffic light, is when a Police Officer in uniform actually directs you to do so.

But there is of course more to this dilemma than that. A driver often only feels compelled to drive over a STOP line when at a red light, because s/he feels intimidated, threatened, pressured to do so by other motorists behind, and the noise and lights of the emergency vehicle. Take Lucy’s case of an ambulance for example. That ambulance might well be responding to a life and death situation, and seconds delay could be crucial. We are all brought up to acknowledge and respect that fact, and not to unduly delay or interfere with an ambulance on a call. However, the fact is you have no legal right to go through the red light, not by one inch, one foot, one metre. 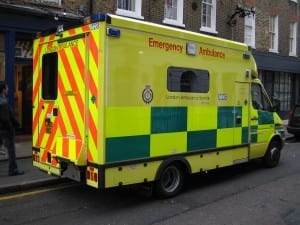 When this exact situation happened on a recent driving test in Grantham that I observed from the back seat of a BIG TOM Driving School car, it was interesting to note that the Examiner, without saying a single word, just pointed to the left to the candidate on test. He did not point forwards, but to the left. We were however, the lead car at the traffic lights, the candidate did shuffle the car to the left, but NOT over the STOP line, it would have been illegal to have done so. The driver of the emergency vehicle in this particular example chose to re-position away from the red lights, and no further action was expected from my pupil on the driving test (and no mention was made of it by the examiner in the de-brief of the test). ‘Knowledge is power’ as the saying goes. If you are aware of an emergency vehicle on a call approaching you from behind, remain calm, do not erratically position your vehicle by making sudden swerves eg mounting a kerb or swerving over on to the oncoming lane. Make effective observations around your vehicle, signal to confirm you are pulling aside, and reduce your speed and/or reposition your vehicle in a controlled and calm manner.

So it could be argued instead, why does this situation at red traffic lights even arise then? Why do the drivers of emergency vehicles pressure/bully/intimidate drivers in front to break the law and drive through the red light in order for them to make progress?

Drivers of emergency vehicles are entitled to ‘make progress’ in ways that the public are not. When on a call, they are exempt from laws regarding speed limits, traffic lights, keep left/right bollards, and even sirens in the night time hours. But crucially, they are not permitted to USE the lights and sirens of the vehicle to intimidate other road users to break the law, or endanger other road users. They are not even supposed to drive on an emergency call in a manner that causes a collision. For example, if an ambulance were to approach a red traffic light at such a speed or intensity of progress that results in one vehicle hitting another simply in an attempt to get out the way of the ambulance, (no question of even being near the STOP line), the ambulance driver is in fact, responsible for that collision. The presence of an emergency vehicle at the time and location of a collision has long been a notable and sometimes contributory factor to the situation. The “blame” in these situations is shouldered by the relevant authority representing the emergency vehicle at the time. How they then apportion blame with regards to the driver of the emergency vehicle, is a matter for them (and the Police).

A qualified ERDT Instructor (Emergency Response Driver Training Instructor) confirms to BIG TOM Driving School that whilst being trained approaching red traffic lights, emergency vehicle drivers are taught to consider the viable option of safely positioning the vehicle in the oncoming lane(s) to therefore prevent any drivers who are held on the red light in front from being tempted to drive over the STOP line. On occasion, due to the layout of the road/junction, this option is not always available or chosen. If the situation arises, where the emergency vehicle driver approaches heavy traffic being held at a red traffic light which is unable to assist the emergency vehicle driver in any way other than going through the red light, then the sirens are to be turned off, and the emergency vehicle is to be held 4-6 car lengths BACK from the stationary traffic, wait for the traffic lights to turn green before then attempting to make progress again. This is how they are trained to deal with the scenario given by Lucy in her question.

No matter what the emergency is, even with knowledge of what the emergency is that a driver on a call is responding to, they STILL have to take into account the (possible) actions of other drivers and limitations by law of other road users around them. They are NOT permitted to use the tones and lights of an emergency vehicle to force other road users to drive in a manner that would endanger the life of others.   Not only are members of the public not permitted to drive through red lights in these circumstances, emergency vehicle drivers are not permitted to encourage them to either.

When looked upon in those terms, the law is quite simple, straight forward and logical…. as is often the way, it is only when human emotions get involved, that judgement can sometimes affect the behaviours of all drivers.

If you have any questions or comments about this blog, please add them below.