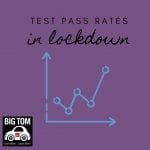 Massive increase in pass rates in the lockdown period

BIG TOM Admin has discovered from official DVSA figures released today that the “emergency” tests that were undertaken throughout the lockdown period had significantly higher test pass rates than are normally experienced across the UK.  This jump in pass rates included theory and practical tests.  The practical test pass rate was 55% on 6264 tests conducted, and the theory test pass rate was 61% on 6369 tests conducted.  Both of these figures represent a 10-15% increase on normal figures previously experienced.  While it may at first glance appear to be only a slight percentage increase, when the quantity of tests conducted nationally is considered, this represents a significant increase in passes in actual numbers.