It can be surprising for some drivers how easy it is to collect points on your driving licence.

The amount of points and length of time that they stay on your licence depend on the type of offence that has been committed. 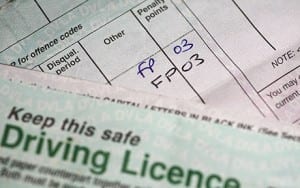 It is also worth noting that for newly qualified drivers, there is a ‘probationary’ period of 2 years, whereby collecting just 6 points (not 12 points as it is for other more experienced drivers) will mean you have to start the qualification process all over again. Take a look here for some driving offences, the points they attract and how long they stay on your licence.

The consequences of getting points on your licence can be far reaching. Car insurance providers will want to know if you have them, and premiums are significantly increased due to the presence of points. Employers will ask to check your licence before allowing you to drive company cars, as will car hire companies, even if you are being offered a courtesy car while your car is being repaired – your licence will be checked. Gone are the days when you hand over the paper part of your licence, everything is done digitally now. This link here will describe how access to information regarding points on your licence is gained for such purposes for 21 days https://www.gov.uk/view-driving-licence

Let’s look at a random group of driving offences and give typical examples of how the points are distributed. It is worth pointing out from the start that in terms of enforcement, on the spot fines with points endorsed can be handed out to you in the form of a Fixed Penalty Notice by the Police, in much the same way that notice for parking fines are slapped on your windscreen. Here are details of the types of offences and vehicles that Police may issue these notices https://www.gov.uk/government/publications/road-traffic-offences-for-which-police-officers-may-issue-a-fixed-penalty-notice  In an effort to unclog our Magistrate Courts with driving offence cases, the number of offences for which these instant notices can be issued is increasing. Police have more scope to issue them instantly, however, that does NOT, in itself mean that “justice” has to be instantly, there and then, meted out – you are entitled to have your case heard in a court, and allow a court to hear all the evidence before deciding on the outcome (it’s just that if found guilty of the offence(s), court costs will also be added to the final outcome).

What does this mean in practical terms? Picture the scene. You are a driving on a dual-carraigeway restricted by national speed signs (70mph for cars), there is a car being driven in the furthest right lane at 50mph. The car has a foreign number plate – perhaps the driver is thinking that is the correct lane to be driving in? Who knows? Anyhow, there are a string of 12 vehicles behind that car, the drivers all itching to get to where they want, busy busy busy.   The driver of a rather powerful BMW takes it upon himself to overtake using the left lane(s). But in order to do this, he first of all has to overtake about 8 of the 12 vehicles being held up. He does good observations to his left, he puts on a left signal, and he slowly but surely passes each and every vehicle. Due to the number of vehicles, and the fact that he is taking care, this manoeuvre takes some time to complete and as such, nearing the end of the overtakes, there was an oncoming slip road on to the dual-carraigeway, but as there were no vehicles entering the dual-carraigeway at that precise time, “no harm was done”. Now, whatever your own opinion of the rights and wrongs of that situation, in the eyes of the law, whilst the foreign driver was most certainly committing an offence in itself, every driver that decided to then overtake the foreign driver using the inside lane(s) was “driving without due care and attention” aka careless driving. The licence is endorsed with points (typically 3) and whilst you could go to Court and tell anyone prepared to listen to you about the foreign driver, and your heavy schedule, and how many other drivers were affected, and your previous good record, the outcome will not alter. The code for this offence comes under the “CDxx” umbrella eg CD10 which stands for “Careless Driving” – this will most certainly raise the eyebrows of any insurance provider, and premiums will be increased as a result.

Other practical offences that attract points include failing to accord precedence at a zebra crossing – not stopping for someone crossing in other words (more on this particular offence in a future BIG TOM blog), tailgating (driving too close to the vehicle in front of you), leaving your vehicle in a dangerous position, and some of you might be pleased to hear this one too…. picture this scene.

Driving on a motorway with 3 lanes, Mrs Blissful, who likes to stay just under the speed limits (just in case…. she is after all a very careful driver), whilst driving at 65 mph, chooses to drive in lane 2 of the 3 lanes (lane 1 being furthest left). She’s not driving a lorry, so doesn’t want to act like one in lane 1, and although there is not a lorry or any kind of vehicle in lane 1 for as far as she can see up the motorway, she wants to save herself the trouble of having to overtake a lorry by switching lanes, so she will stay put in lane 2. Why make life hard for yourself she thinks. This can’t be doing any harm in her mind, because if anyone does want to do the maximum speed limit of 70 mph, they can happily do so by using lane 3. Everyone’s happy. Or so she thought until she was pulled over by the police and was also given points for the offence of lane-hogging. The Police pointed out to her that drivers are expected to use the left most lane in these circumstances where there is no good reason NOT to use the vacant lane to her left. “The complications and congestion that can be caused by lane-hoggers might be quite surprising to the blissfully unaware, Mrs Blissful”, said the Officer.

This blog outlines the driving offences that can cause your driving licence to be endorsed with penalty points, and the effects when that happens. How does this make you feel? Does this anger you, make you feel assured and safer on the roads, do let me know below!