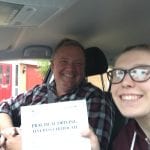 Emily Ashcroft from Cranwell passes her driving test in Grantham

Emily has been successful in passing her driving test despite being on the receiving end of a very late cancelled test.  On the morning of her original driving test, Emily was called by the DVSA with just over an hour to go, saying that the examiner was unable to do the driving test.  Her driving instructor Tom Ingram was unimpressed (see below) but all credit to Emily for staying positive.  She now has a full driving licence and freedom to move on with her life.

“I have to say how impressed I have been with Emily’s positive attitude. I give much credit to the support from her parents too. It was very unkind and bordering on unprofessional for a public service organisation to be cancelling a driving test at such short notice.  I know many pupils who can’t sleep well before a test and get very affected with pre-test nerves.  It seems cruel to me to not have provisions for dealing with such incidents when they occur.  Emily passed on her first attempt with just 2 minors recorded – what a star pupil.”

” I would definitely recommend this course for anyone, whether that be learning to drive for the first time or practising techniques you’ve already learnt. Amazing experience!”